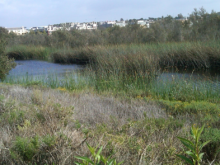 A decade ago, the Playa Vista developers completed the 26.1-acre Ballona Freshwater Marsh, a habitat area to mitigate impacts of urban runoff from the Playa Vista development, portions of existing development to the north and portions of Loyola Marymount University to the south.  The marsh construction and future operation and maintenance cost were made the developer’s responsibility and partially funded through special assessments on Playa Vista property owners.

The Freshwater Marsh proposal was somewhat controversial back then (as was everything related to Playa Vista), but was nonetheless advocated by Friends of Ballona Wetlands founder Ruth Lansford and others.  The marsh, it was argued, would not only mitigate the impacts of runoff from the new development and adjacent areas (in a way unlike any existing west Los Angeles neighborhood), but would provide critical habitat for threatened and endangered bird species, including the federally-listed Least Bell’s Vireo.  The Least Bell’s Vireo requires willow habitat near fresh water for nesting, which the Freshwater Marsh plans included.  The final approval required the Freshwater Marsh create habitat superior than what previously existed on its footprint.

Despite opposition and litigation from various parties (which delayed construction for over a year, [1,2]), the Freshwater Marsh was completed in February, 2003, and now provides a system that benefits not only Playa Vista, but the surrounding community as well.  A 25-acre riparian corridor to the east was added and completed in 2008.  The corridor runs along the base of the Westchester Bluffs from Sepulveda to Lincoln Boulevard, and connects with the Freshwater Marsh through a passage under Lincoln Boulevard, which incorporates a dry walkway for small mammal movement.  Urban runoff from Jefferson and Lincoln Boulevards, Playa Vista and LMU flows into the corridor, which then feeds the Freshwater Marsh.  You can walk the corridor today between the sports park and dog park on Bluff Creek Drive.   Even its former opponents today collect specimens and photographs from the marsh.

Today, a decade after completion, the Freshwater Marsh hosts one of the largest varieties of birds, both waterfowl and songbirds, of any coastal marsh area in southern California (3).  The most recent monitoring study shows the Freshwater Marsh system exceeds the 5- and 10-year goals established by federal, state and local permits for bird diversity, with 31 breeding species using the marsh in 2012.  Four of these birds are sensitive: the Virginia rail, moorhen, cinnamon teal and least bittern.  The Least Bell’s Vireo also has nested in the marsh complex each year since 2010, and is expected to return next spring.  A total of 217 bird species used the marsh for breeding or foraging in 2012, an increase of eight over 2011.

Owing partly to strict regulations in Playa Vista which minimize polluted runoff  (e.g., washing cars is prohibited, and most landscape irrigation is drip-watered), the marsh’s water-cleansing performance also continues to exceed requirements.  As in previous years, water and sediment quality data show the marsh continues to function successfully, showing no accumulation of pollution that would pose a risk to aquatic life.  Without the Freshwater Marsh and Riparian Corridor, runoff from long-ago development on Jefferson Boulevard (such as Home Depot) would have continued to drain to the area now slated for tidal wetland restoration.  Both the marsh and corridor continue to provide a functioning freshwater wetland ecosystem that plays a significant role in increasing biodiversity of the region and in enhancing quality of urban runoff to Ballona Creek and Santa Monica Bay.  The Freshwater Marsh now serves as a model for additional fresh water wetlands which may be constructed as part of the state’s Ballona Wetlands Restoration Project, to treat the foul street soup from the Venice and Del Rey areas before it runs off into our waterways.

The Freshwater Marsh is open to the public every day with free parking along the south side of Jefferson Boulevard, west of Lincoln Boulevard.  Friends of Ballona Wetlands leads a tour from that location on December 28th, and every second and fourth Saturday beginning at 10 AM.

Highlight: Request Your Ballot by June 1
Register to Vote in the Upcoming NCWP Election